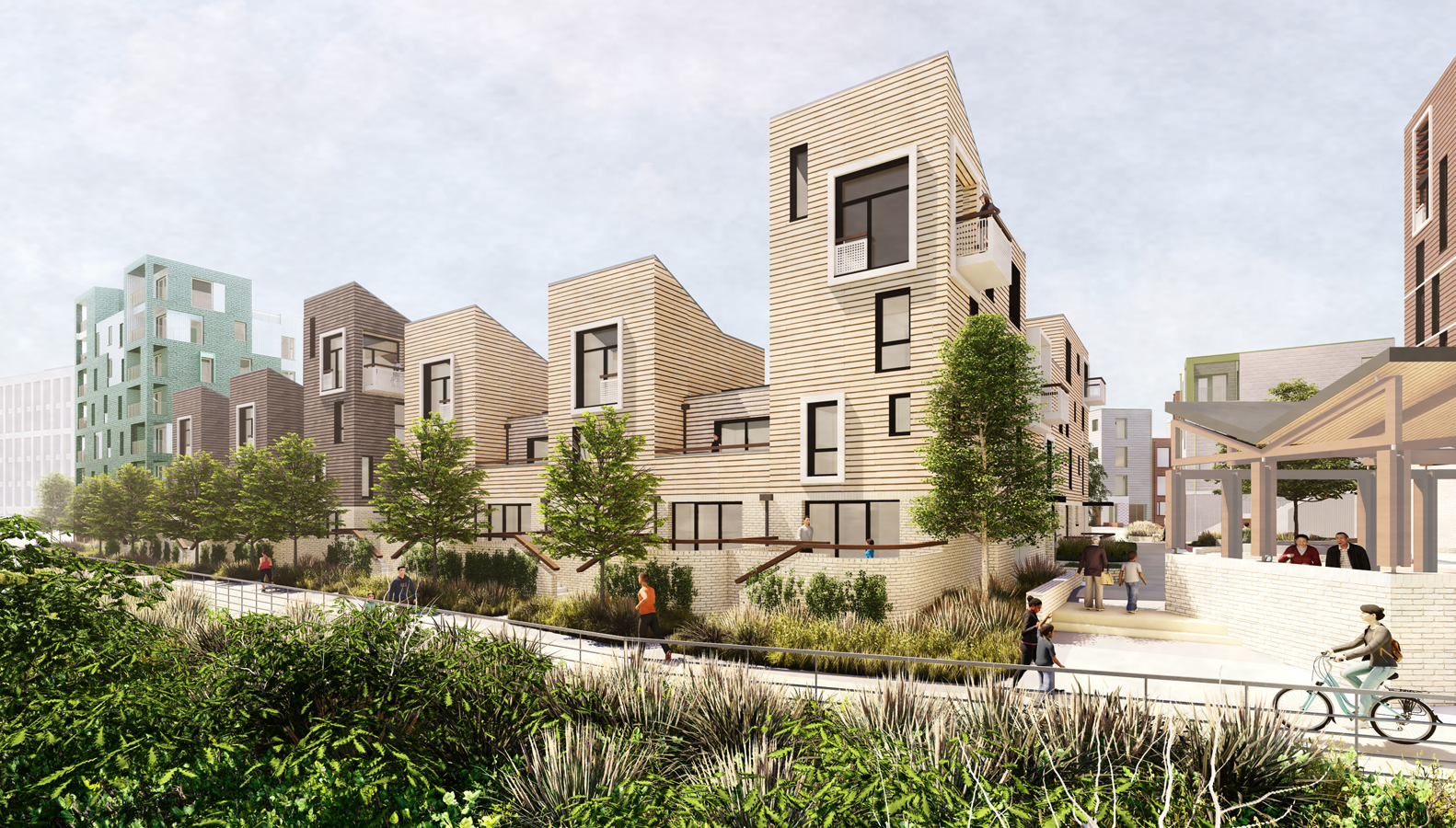 The Vaux neighbourhood quarter, designed in collaboration with Mawson Kerr Architects, has received planning permission. The new housing scheme forms the first phase in the masterplan for the regeneration of Riverside Sunderland. The neighbourhood is designed to be an exemplar of high-density city living and working, characterised by typologies that echo the history, topography and rich cultural heritage of Sunderland, whilst adopting a Smart City infrastructure, and a sustainable development model that will contribute to the city’s carbon-neutral ambition. The scheme is being managed by igloo Regeneration on behalf of Sunderland City Council.

The first of four proposed urban quarters Vaux will provide 91 houses and 41 apartments and has been designed to quickly establish the essential character and quality of Riverside Sunderland as a place to live; laying the foundations for a brand new city centre community that others will want to join, and stimulating demand for the adjacent neighbourhoods set to grow up around it.

The Vaux development area sits atop a dramatic river gorge; an extreme topography that has shaped the way the city has developed. The new housing is set to occupy the Vaux peninsula - a unique site to the north of the city centre, defined by steep cliff edges to the north and west, that rise up from the Riverside Park below. The development will extend the city right up to the cliff edge, creating a bold new city edge and silhouette inspired by Sunderland’s historic industrial skyline

Three exemplar house types inspired by local and regional precedents, have been designed specifically for the escarpment edge, where they will provide a strong and distinctive silhouette as viewed from across the Wear, drawing on the topography of Sunderland’s unique historic skyline. In turn, viewing lines, from public spaces, and upper terraces within the development have been carefully curated, to make the most of riverside and open-space views.

The three housing types include Wearside Maisonettes, inspired by the stacked maisonettes typical of the region, Sunderland Courtyard Houses, based on the much-loved Sunderland cottage, and stepped to create a distinctive profile, and Pele House Apartments; seven storey apartment buildings based on traditional Northumbrian watch towers, that will offer dual aspect living arranged around an atrium circulation.

Designed to suit 21st century living patterns, the homes range from one-bed apartments, to two bed stacked maisonettes suited to sharers, and three bed family sized houses with private gardens. All have home working space and private outdoor amenity space, often in multiple locations around the home to extend seasonal use, and many of the homes are wheelchair accessible.

The rich colour palette of the scheme includes ceramic tiles to reflect the local pottery, the red of the city’s civic buildings, and the natural chalk escarpment edge. A brick plinth is proposed at ground storey level in homage to the Sunderland Cottage, with the addition of customisable coloured details and banding to bring variety to the architecture, and add further character and identity to the elevations.

The new housing at Vaux is configured in five housing clusters to create sheltered mews streets and courtyard areas; each cluster has a distinctive character and responds to its location within the masterplan. To nurture close-knit communities, each cluster offers a series of localised spaces for social interaction between neighbours and for children to play close to home.  A series of arches form a defined threshold between public, communal, and private spaces.

Additional communal green spaces include a new allotment garden connected to the neighbourhood via a new ramped access from the cliff top promenade, and a series of public squares, and larger play areas for children, where events can take place, and people can meet to take in the views. Pedestrian routes also connect the cliff top promenade with the new street network, to ensure connectivity and permeability.

Andrew Matthews, Founding Director, said: "Our proposal for the new Vaux housing will create a new vibrant 21st-century urban quarter. Our design avoids the ubiquitous perimeter block model which has become the default position of many recent urban city plans; instead our design looks more carefully at regional and historic patterns of development to create a new hierarchy of streets, squares and mews, providing spaces for social interaction. Drawing on the city’s historic industrial skyline, the Vaux masterplan captures the river Wear’s dramatic topography and looks to create a new distinctive boundary to the River’s south bank right at Sunderland’s heart.

A range of housing types are proposed to support a diverse community including young families and professionals, as well as key workers and the elderly. All the homes are designed to meet 21st Century living patterns including plans that can adapt to future change, provide for home working and a variety of both private and shared amenity space. The housing will also meet stringent sustainable targets employing modern methods of construction to meet high thermal standards and dramatically cut carbon both in construction and in energy use."

igloo Regeneration’s chief executive, Peter Connolly, said: “These homes set a precedent for the quality of housing to be delivered in UK cities. The homes will not only transform the feel of the place and create a new neighbourhood in Sunderland, but they will also be a shining example of how working closely with a community can create a mix of housing that reflects the rich fabric of the community and the scale of their ambition.

All eyes will be on Sunderland in 2023 when we host the Future Housing EXPO and these homes will be presented as examples of next generation, zero carbon living in tech-enabled smart homes. I look forward to homeowners and visitors enjoying the streetscapes brought alive by the planned rewilding. Looking out of the windows at feeding birds and listening to the sounds as you walk through an area will all add to that crucial sense of health and wellbeing.”

Due to be completed by 2023, in time for the Sunderland Future Living Expo, a public event that will showcase a new way of city living and the transformation of Riverside Sunderland into a vibrant new place to live.