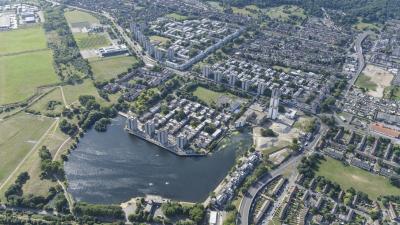 Peabody’s ambitious plans are set to transform Thamesmead in the London Borough of Bexley into a thriving new quarter of London that is welcoming and inclusive for both existing and future residents. Proctor and Matthews was appointed by Peabody to lead an international team, including Dutch Architects Mecanoo to develop a strategy document, ‘Thamesmead Tomorrow’ for a masterplan of 8,000 new homes. Involving background analysis, site studies, critiques of previous studies and design opportunities, the report sets out a vision to make Thamesmead a high quality place to live and work, positively shifting perceptions and regenerating the neighbourhood.

Informed by an in-depth study of the area, and social infrastructure, the team compiled a set of 10 values to help shape future development. Key strategies include improving connectivity with adjacent neighbourhoods - the existing 1960s blocks create fragmented communities, a lack of cohesive structure or clear recognisable character. Valuing Thamesmead’s uniqueness and avoiding a tabula rasa approach, make the most of the core qualities of the area and develop a positive sense of identity. Encouraging healthier lifestyles by reducing the reliance of cars and carbon technologies by creating new networks to facilitate cycling and walking connect residents to the abundance of open green spaces in Thamesmead.

These 10 objectives were used by stakeholders to communicate and agree the aspirations and direction for the project. Following on from this report, Proctor and Matthews developed a capacity study across the masterplan area and more detailed proposals for a number of the 27 parcels, including office buildings, commercial and community space, meanwhiles uses, private, PRS and affordable housing. This masterplanning design work was led by a strong sense of identity and placemaking, informed from the early work and a comprehensive consultation strategy with local residents.

The first phase of development - from the new Crossrail Station at Abbey Wood, to a new civic square at Southmere Lake - was developed to outline, detail and tender stage. Set over an area of 9.86ha, the proposal will deliver 1,622 new homes, new public spaces and over 11,000 sqm of commercial and community uses across the 4 phases. Proctor and Matthews submitted a hybrid planning application in 2016 that was unanimously approved by the London Borough of Bexley - unheard of for projects of this scale.