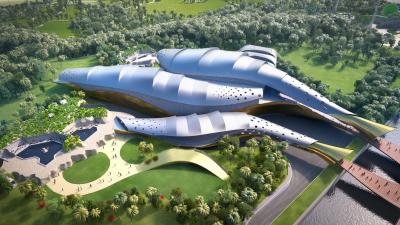 The Oceanarium is the principal attraction of the Sea World masterplan in Sindhudurg, India and also includes research, conference and education facilities. The aquarium will be one of the largest of its kind and unique to India and Asia and showcases the specific aquatic environments found in India and the continents surrounding oceans.

The scheme has been developed in parallel with leading experts including zoologists, marine biologists, aquarists and exhibition designers. Visitors will be taken on a journey through the different aquatic landscapes, which include the presentation of twenty nine aquarium tanks.

The architectural concept of the Oceanarium comprises four sinuous elongated marine like forms, which are intertwined like a family of ocean creatures swimming together and diverge from a single tail to fan out across the site.

Each form comprises upper and lower shell structures of contrasting characteristics. The lower shell is conceived as terrestrial; an organic growth from the earth with an external, coral coloured surface and vermicular patterns. The upper shell is of the ocean, with a scale like skin and incisions, reminiscent of gills of a marine creature, which form skylights allowing filtered daylight into the public areas.

Located at the end of the masterplan's principal east/west route, at the edge of the western forested plateau the building overlooks the expansive beaches of the Indian Ocean.

The Oceanarium experience begins with the dramatic entrances seen across the Grand Cloister landscape. Two zoomorphic bridges set across a moat lead to separate ticketing areas for the aquarium and conference venue. The conference hall occupies the southern wing, with internal controlled access to and from the exhibition spaces.

Circulation routes include tunnels and bridges and allow visitors to view exhibits from underwater and at the surface.

The visitors’ journey through the atmospheric spaces, which include the external exhibition areas at the rear has been designed to entertain and educate for approximately ninety minutes.