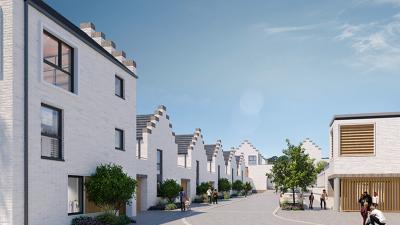 Proctor & Matthews Architects was commissioned to design 27 family homes and a community crèche as part a wider masterplan, creating a new arrival sequence at the entrance to the new neighbourhood and a defined neighbourhood edge on the western landscape boundary. The family homes, and maisonettes are located within the historic estate of Kilruddery House; a Tudor revival mansion with Sixteenth Century origins, located within the southern outskirts of Bray, County Wicklow, to the south of Dublin.

Each home within the terrace is defined by a pronounced stepped gable: a reference to the architectural detail of the original stable block gatehouse within the historic estate. Similarly the versatility of the new house typologies helped to consider new cluster configurations from those explored at Wilkinsons Brook and assist on the creation of an axial termination to the arrival space in the form of a mews of four large houses contained between two arched portals. On the western boundary within the site a similar configuration of terrace and mews court helps to provide a strong edge to the neighbourhood and an active frontage to an adjacent linear amenity space and stream.