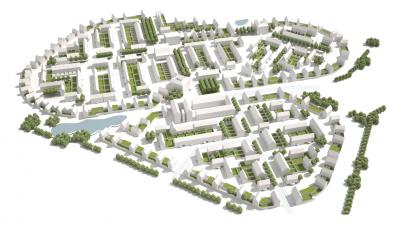 Greater Beaulieu Park is a new neighbourhood of approximately 3,600 homes located on the site of Henry VIII’s palace of Beaulieu (now New Hall School) and the associated deer park landscape located to the north of Chelsmford.

The concept behind the 2012 competition design for a neighbourhood masterplan drew inspiration from the local historic precedent of the village Pleshey – a defined Norman settlement to the north west of the site – and an abstract exploration of the constituent components of English landscape gardens: groves, knots, follies and parterres.

The proposals suggest the creation of an 88 hectare accessible parkland in which an ‘archipelago’ of clearly defined distinctive neighbourhood clusters of around 420 homes are strategically placed. Each medium density shared surface ‘village’ has a strong boundary edge forming an articulated threshold between the internal streets, lanes and public neighbourhood squares and the surrounding landscape. The ‘edge’ house typologies of integral walled gardens form frontages to both the neighbourhood streets and the surrounding landscape. This configuration avoids the need for exposed back garden fences – all too often forming an ill-defined transition from built form to surrounding landscape in ubiquitous suburban developments across the country.