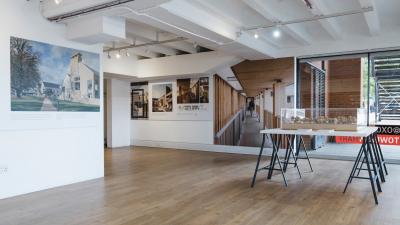 From Boundaries to Belvederes
London Festival of Architecture, 2019

An analysis of boundaries is central to the study and understanding of rural landscapes and urban form. Whether it is the distinctive vernacular enclosures and field boundaries which subdivide the countryside, the transitional territory between city quarters, or the controlled public-to-private realm doorstep thresholds which articulate our streetscapes, all are significant in defining local identity and creating a sense of place.

As architects and urban designers, we are drawn to settlement boundaries which have become promenades and where the transition between city neighbourhoods is celebrated by defined yet permeable structures – loggias. We search for the moments along the edge where framed views become places to pause and interact: Where Boundaries become Belvederes.

The exhibition explored these moments and the nature and importance of boundaries in buildings and settlement design through the study of five recent projects by Proctor and Matthews Architects.

Where do Houses Live?
London Festival of Architecture, 2018

“If people live in houses where do the houses live? If they are homeless all we are left with is the typical endless, featureless suburbia.” Gordon Cullen, Maryculter, 1974

An exhibition of projects by Proctor and Matthews Architects explored the issues of identity and sense of place and offered an approach to the design of new neighbourhoods which is anchored in the social, environmental and cultural contexts specific to each location.

From the design of an extension to an existing settlement on the edge of the River Tweed in the Scottish Borders, to proposals for a new neighbourhood quarter to the north of Cambridge, the exhibition outlined the creation of a design narrative.

The contemporary interpretation of almshouses is the focus of several of the studios recent projects including; Steepleton, Tetbury, The Chapter House, Lichfield, John Dower House, Cheltenham and Hargood Close, Colchester. The exhibition and discussion chaired by Chris Foges, Editor of Architecture Today, considered the social implication of this historic typology and the role it might play in providing future models for later living and general needs housing.

A Celebration of Peabody Architecture and Design
Royal Institute of British Architects, London, 2017

A Narrative of Place
London Festival of Architecture, 2016

An exhibition of recent work exploring two distinct themes – 'Urban Peripheries' and 'A Narrative of Place'. Four projects formed the focus of the exhibition including South Thamesmead, The Ridgeway Village, Abode at Great Kneighton and Mountfield Park.

On the Threshold: The Changing Face of Housing
Victoria and Albert Museum, London, 2006

The Work of Proctor and Matthews
Kent Institute of Art and Design, 1994

The Art of the Structural Engineer
Royal Institute of British Architects, London, 1994