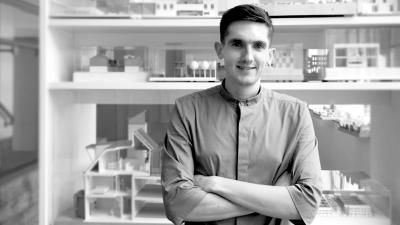 Harrison joined Proctor & Matthews in 2017 and has since worked on a variety of projects from strategic masterplanning exercises in South Thamesmead, to designing and detailing individual buildings including a flagship office for Homes England in Northstowe.

Harrison qualified from London Metropolitan University with a Distinction and previously studied at the University of Sheffield, where his final year thesis was awarded the RIBA Yorkshire Gold and John Taylor Award for Urbanism and Town and Regional Planning. He was also nominated for the RIBA Presidents Medal.

Currently Harrison is part of the team designing a new urban quarter of over 400 homes at Northstowe in Cambridge for Homes England. The project will be delivered using innovative off-site volumetric construction technologies, providing homes to suit a range of 21st Century needs and lifestyles.

In addition to his project responsibilities, Harrison works on the practices’ BIM proficiency, having played a key role in developing the studio’s BIM strategy and protocol, and delivering projects to BIM Level 2.

Harrison has an interest in buildings with historic value and heritage interest and has experience working on existing buildings in both World Heritage Sites and Conservation Areas.